ISIS in Raqqa put out an unusual piece of video propaganda over the weekend -- a drama.

While it is not uncommon for jihadist videos to feature vignettes that dramatize propaganda elements, such as B-roll footage of someone at a computer, or in training, this is the first time I can recall that a jihadist outfit has put out a proper fiction story with a beginning, middle and end, featuring actors and characters with their faces shown.

The video runs 11 minutes and 28 seconds, and is said to be "based on true events." (Many thanks to Charlie Winter for help with discerning key plot points from the Arabic. If you haven't been following his work on the topic of ISIS propaganda, now is a great time to start.)

It's not exactly complex, but it is definitely an advancement in storytelling. It follows the story of a young man named Muhammad, living as a citizen of the caliphate in Raqqa, under Western bombardment. He is plagued by melancholy, because he feels powerless to stop the destruction all around him. Muhammad mopes and introspects in voiceover, pausing on a park bench to watch an ISIS combat video as he contemplates what is missing in his life. 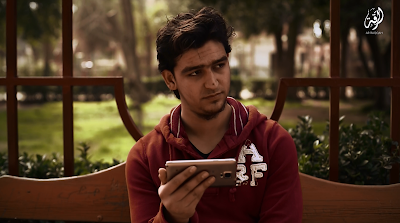 After a rather extensive amount of moping, during which the young actor exhausts his repertoire of sad faces and finds no relief in eating or sitting on his couch, Muhammad prays at the mosque and talks with the sheikh afterward, who writes down an address on a piece of paper. More introspection ensues. 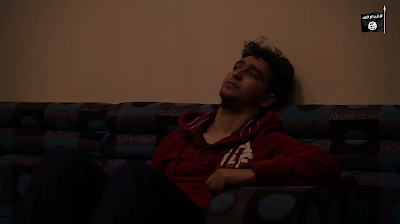 The address, of course, is for an ISIS military recruiter. The young man is welcomed with open arms by a notably happy guy doing paperwork in an office. 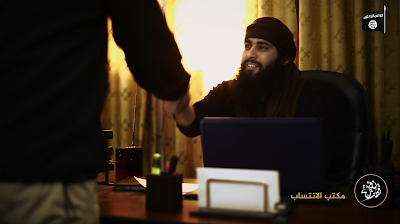 After some discussion, forms are filled out and he is signed up to fight in the army. In training and indoctrination, in camaraderie with his squad, and on the monkey bars that are ubiquitous in jihadist propaganda videos, he finds fulfillment.

And lives happily ever after... well, maybe not ever after, but that is a story for another day. 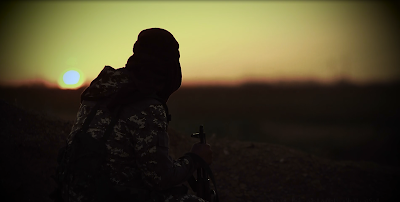 With a caveat that neither of us has watched every single piece of ISIS's massive propaganda output, neither Charlie nor I can recall a straight drama presentation of this sort. Al Qaeda once released a docudrama-style account of the 9/11 hijackings (titled The 19 Martyrs and narrated by Adam Gadahn), but this was a mix of B-roll, news clips and real footage, and it is not quite the same.

While not strictly a dystopian work (except in the sense that ISIS itself is by definition dystopian), this piece does fall under the scope of this blog's interest in how fiction is used by extremist and radical political movements.

I have long kept an eye out for the use of dystopian (or other) fiction by jihadist groups with almost nothing to show for it (an al Qaeda-supporting forum member once wrote 2500 words or so on a skeletal vision of a future caliphate inspired by Osama bin Laden). This is likely influenced by a general disdain for fiction among Salafis in general. While some morally edifying fiction is considered marginally OK, one might expect jihadists would be less familiar and less comfortable with the genre and its conventions. Readers may be familiar with works I have not seen, and feel free to ping me on Twitter with any examples I may have missed. UPDATE: Some interesting notes here from Nibras Kazimi, including more detail on the forum post mentioned above, which resulted in a couple minor corrections. END UPDATE

The debut of this new format, essentially a morality play in the format of an after-school special, shows that ISIS is still pushing for innovation in its propaganda releases. Fiction has traditionally been a vital tool for political movements, both radical and otherwise. From pro- and anti-abolitionist fiction to the rise of the Third Reich to The Turner Diaries, fiction has long been a powerful tool for political argument, and until now, it is a format that has been absent from the jihadist toolbox. While not a game-changer in itself, the Raqqa video is an interesting and unexpected development, and only time will tell if it is the start of a trend.

As a final note, the video is aimed at an internal audience. It is, more or less, an army recruitment video. As such, it suggests that residents of Raqqa may be feeling some malaise in light of recent developments and that they are not turning out to fight in defense of the caliphate in adequate numbers. The tone of the video is quite melancholy and even in its conclusion is far from the triumphal celebrations of last year's propaganda. It is yet another sign that things are not going well inside the caliphate, and that ISIS's victory narrative may be fading in the face of unpleasant reality.