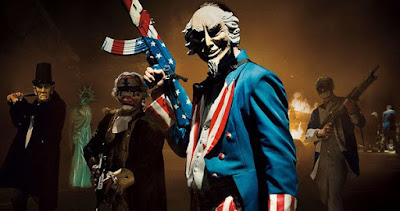 When I was walking to the theater to see the latest installment in The Purge franchise, I saw up ahead an angry shouting confrontation between two pairs of young men, belonging to different races and (to judge from the snippets that I could hear) different religions.

The confrontation defused without a physical fight as I got closer, but it was the second such incident I had witnessed in one week, and that is pretty unusual in my neck of the woods. The altercation landed on top of a couple days of disturbing videos showing black men being killed by police, a couple weeks watching the sudden outpouring of hate in the wake of Brexit, a couple months of the election from hell, and a couple years of closely monitoring ISIS atrocities for a living. My fundamental optimism about human nature, which has endured for a long time despite the nature of my work, has been stretched awfully thin lately.

By the time I sat down in the theater, I was already in the tense, unsettled frame of mind that The Purge: Election Year is supposed to provoke. Real life, at this point, is a hard act to follow.

The Purge trilogy -- consisting of The Purge (2013), The Purge: Anarchy (2014) and The Purge: Election Year, which opened last week -- holds a peculiar genre-spanning place in the annals of dystopian film. They are usually classified as horror films, and they self-consciously traffic in the visual and cinematic language of that genre. But they are laden with very overt political commentary.

For the uninitiated, the series takes place in the not-too-distant future, where the "New Founding Fathers of America" have instituted an annual ritual known as the Purge -- a period of 12 hours on one night each year during which all crime is legal, up to and including murder.

The thesis behind this policy is a familiar trope, the Dystopian Spectacle. In short, the premise is that a socially sanctioned experience of shared violence within controlled boundaries provides a catharsis that reduces crime and conflict in the everyday context. As I recently wrote for Foreign Policy, the premise is not applicable in the real world. But it is the assumption that fuels the movies, or at least the first two.

Exposition, in the form of claims from the New Founding Fathers in each of the first two movies, explains that the Purge has virtually eliminated crime and unemployment. But from the beginning, it is also clear that the Purge disproportionately kills the poor and minorities, while the wealthy barricade themselves in suburban fortresses. In the second movie, this subtext becomes much more explicit, with the rich sending out kidnap squads to detain the poor for ritualistic executions, which can be carried out without risk to the Purgers. A resistance movement also surfaces in the second movie, conspicuously led by minorities, to battle the Purge's socioeconomic injustice.

It can be oddly difficult to decipher the politics of James DeMonaco, the creator of The Purge franchise. Although the films are explicitly arguing against a wealthy/white power structure's oppression of poor/minority communities, the film's internal logic also asserts in a pretty straightforward manner that killing off the lower classes successfully eliminates crime and unemployment, even if it is framed as morally wrong. So it's an overt outrage that the poor and minorities are being disproportionately targeted, but there is a covert message that they are in fact responsible for crime and economic weaknesses in the first place, rather than the systemic inequality that DeMonaco would like you to believe he is concerned with.

(Sidebar: This is a not-uncommon issue in tales of dystopia. Consider Equilibrium, the 2002 dystopian action movie starring Christian Bale, in which human emotions are suppressed with drugs, resulting in a joyless but otherwise perfect utopia. The problem with the system is that it is generically wrong, not that it doesn't work. In a movie like Brazil, by comparison, the dystopian regime is both wrong and ineffective.)

The franchise's political currents and confused racial politics come to a head in The Purge: Election Year, in which (white female) Senator Charlie Roan, played by Elizabeth Mitchell, runs for president on an anti-Purge platform, leading the (white male) New Founding Fathers to target her for death under the cover of the latest annual Purge. Meanwhile, without getting too spoilery, the (mostly black) resistance movement sets in motion a plan to settle the political conflict with bullets rather than ballots.

Further muddying the message, the goons hired by the New Founding Fathers of America to kill Roan are explicitly shown to be neo-Nazis, likely in a nod to the current election cycle. But they are also stipulated to be mercenaries, putting them at a remove from the actual government. While the distance here is pretty insignificant for most intents and purposes, it's not clear why the fascist NFFA government wouldn't just use police or the military to get the job done -- as they seem to have done in the previous movie. The New Founding Fathers are revealed to be extremely unpleasant, but they are not explicitly shown to be Nazis themselves, instead motivated by economic gain, underneath a thick surface layer of old-time religion.

The viewer may well sympathize with the resistance's kinetic approach over Roan's desire for a political solution, but the film makes a pretty explicit statement about which approach is morally superior. It's hard to understand why DeMonaco didn't cast a person of color as Roan, which would go a long way toward defusing this distracting subtext -- if it's subtle enough to be called subtext. I may not be the best judge. After a year of intensive study of dystopia, I find myself paying special attention to the genre's often-complicated racial politics. But even accounting for the genre's myriad issues, The Purge series stands out for its baffling combination of themes and assumptions.

All of these weird cross-currents may be partly responsible for the fact that The Purge franchise has inspired exactly the kind of violence that it overtly condemns, although there is perhaps a stronger and less political argument that the films' effective fetishization of violence simply doesn't pair well with its claimed anti-violence message.

Election Year ends on a note that could serve as a conclusion to the series, without foreclosing on the possibility of another sequel. While the world doesn't really need another Purge movie, it might provide an opportunity to figure out just what the hell DeMonaco is trying to say, if he even knows himself. Like its predecessors, The Purge: Election Year is a mess, but like its predecessors, it's a hot mess, and as such, strangely mesmerizing.

And so the evening goes out, and the tense, unsettled feeling from earlier today continues and deepens. News reports about the shooting of multiple police officers during protests in Dallas prompted social media users to start talking about a Purge, amid rumors (so far unfounded) of a planned Purge-style event in Baton Rouge.

One important function of dystopian fiction is providing us with language to describe what is happening in the world, such as doublespeak from 1984. But depending on the source material, this language can be constructive or destructive, as in the 1998 case in which three white men dragged a black man to death, stating, "We're starting The Turner Diaries early."

As a tool of language, the Purge may be more inciting than illuminating, in part due to the franchise's confused ideology and revenge violence theme. Users noting the parallel on social media is one thing, but does the Purge offer a form of sanctioning for violent release? There are no easy answers here, but part of the power of dystopia lies in its ability to convey social extremes. It is usually difficult to see causality or concrete connections, but it does happen sometimes (as with The Turner Diaries). More often we are left with uneasy resonances, which are heightened on bad days like today. Bad days that come around too often.