I recently started reading the comic book Bitch Planet after seeing Ta-Nahesi Coates tweet about it several times, and it's a must-read for fans of dystopia. The premise is a future patriarchy in which women, particularly women of color, are jailed for various acts of being "non-compliant." These non-compliant women are sent offworld to the Auxiliary Compliance Outpost, or "Bitch Planet," a term which the patriarchs inevitably respond to by saying "we don't like to call it that." The patriarchy itself reads like a much smarter, much edgier take on the New Founding Fathers of America.

Aside from recommending it as a very powerful read, the story is still in its early stages, so I don't want to get too deep into an analytical reading, but I wanted to highlight one element that has emerged early in the story and is near and dear to my heart, the dystopian spectacle. In Bitch Planet, the spectacle is a game called Megaton. I will let readers discover the details, but the comic does an excellent job of explaining the social function of the dystopian spectacle, and I wanted to share a couple panels on that topic for readers of my previous article.

Meanwhile, what are you waiting for? Go buy it! (Not safe for work.) 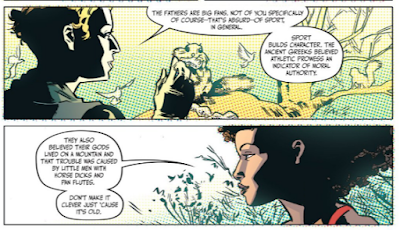 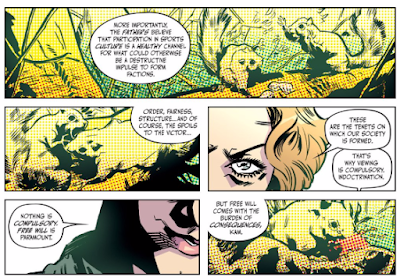