When? A Prophetical Novel of the Very Near Future 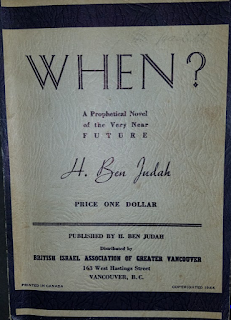 The following is an excerpt from my forthcoming paper for the International Centre for Counter-Terrorism--The Hague's Strategic Counter-Terrorism Communications project. The paper examines the evolution of the white supremacist ideology Christian Identity from its roots in British-Israelism, a historical theory claiming that Anglo-Saxons are descended from the Lost Tribes of Israel. The excerpt has been lightly edited to remove first references. The paper is expected to publish this week, and this post will be updated with a link.

In 1944, the British-Israel association of Greater Vancouver published When? A Prophetical Novel of the Very Near Future under the pseudonym H. Ben Judah.[1]

When? is a dystopian/apocalyptic novel about the End Times as seen from a nominally British-Israelist perspective, but in fact, “the work stands as one of the first statements of what was to define Christian Identity doctrine, the belief that the Jews are the offspring of Satan,” according to Michael Barkun.[2]

The book opens with a stipulation from the author:


Do not let the reader be deceived into believing that this book is anti-Semitic. Actually it is just the opposite, the writer himself being of Semitic Judah, and therefore wishing to point out that there are two types of so-called Jews, the real Semitic Jew and the Ashkenazim so-called Jew who is a convert to Judaism only, ostensibly by religion, but not by blood.

When the reader understands these points, he will realize that this book is not anti-Semitic, but rather pro-Semitic, as it warns only of the Ashkenazim and their plans for world control, and endeavors to point out that the true Semitic Jew is not responsible.[3]

The protagonist of When? is Brian Benjamin, a British secret agent of Sephardic Jewish descent, engaged in spying on Magog, an enemy state led by Gog, whose intelligence apparatus has infiltrated the West and who is now preparing to wage war for the Holy Land. Benjamin makes the mistake of asking his superior officer questions about who the real Jews are, resulting in an epic amount of exposition that one of the characters even concedes is a “long rigmarole and not very much to the point.”

In the style of other political dystopias, When? features lengthy Socratic dialogues at the expense of plot,[4] in this case including extensive bibliographies from the voluminous output of past British Israelists, as well as race theorists and anti-Semites.

Published in 1944, When? is overwhelmingly concerned with discrediting the legitimacy of the Jewish claim to Palestine on the grounds of race, religion and politics. It does so by citing a torrent of British-Israelist authors—the characters at times literally read books to each other—and the Protocols of the Learned Elders of Zion, which moves in this text from being an influence on British-Israelism to being a primary source.[5]

When? introduces a new and important thread to British-Israelist thought. The author reiterates previous claims that Ashkenazi Jews are descendants of Esau/Edom, but adds two crucial new elements to the story—first, that the Edomites are descended from Cain, the Bible’s first murderer, and second, that Cain is not the son of Adam, but rather the son of Eve and the serpent from the Garden of Eden story—Satan himself. Thus, the author argues, Ashkenazi Jews are the “seed of the serpent,” literally Satanic in their origin.[6]

The author’s argument states definitively that Cain is “spiritually” the son of Satan, and leaves open the strong implication that there is more to the story.


“…Who do you think was the father of Cain?”

“Why, Adam of course,” Brian replied.

“That is the generally accepted conclusion, I know,” replied his cousin, “but I do not think that it is correct. Adam may have been the physical father of Cain, but he was certainly not his spiritual father.”[7]

The When? author stops short of unambiguously stating that Cain is the genetic son of Satan, but he strongly implies it and documents biblical accounts of interbreeding between “fallen angels” and Cain’s progeny.[8] Whether or not Cain was Patient Zero for the demonic seed, the phrase “seed of the serpent” has literal, genetic meaning here.

The theory that Cain was the son of the serpent (whether physically or spiritually) was not new. It had originated in Jewish and Gnostic writings in antiquity,[9] and enjoyed somewhat of a revival in the 19th and 20th centuries.[10] The When? author combines this idea with British-Israelist genealogies to create the foundational claim of Christian Identity—that modern Jews are descended from Cain and from Satanic supernatural beings. The author further claims Satan’s conspiracy against Anglo-Israel— explicitly referencing the Protocols—originated with Cain, who is cast as the founder of the “synagogue of Satan.”

The argument mounted in When? incidentally opened the door to designating all non-white races as the progeny of Satan, as Identity ideologues would later do, but the author did not press that claim directly. And despite their demonic bloodline, the author leaves open the possibility of redemption for the serpent’s seed: If Jews accept Christ, they can still join the kingdom.

After almost 100 pages of dialectic exposition in the pages of When?, the battle of Armageddon finally takes shape, as the armies of Gog take Jerusalem.[11] In an inexplicable narrative choice, the author inflicts a concussion on protagonist Brian, who literally sleeps through the apocalypse, waking up weeks later to have events described to him by another character.

While Brian slept, the forces of British Israel formally prayed to God for deliverance, and Gog’s forces were immediately struck down at their moment of triumph by a supernatural “holocaust” that kills thousands of enemy soldiers, swallows their leaders whole, and destroys the Dome of the Rock and other Muslim structures. [12]

The Second Coming follows. After the earlier success of prayer, the King of England broadcasts a statement to the British Commonwealth and America acknowledging their true identity as the nation of Israel, urging all subjects to give thanks and pray for the return of the kingdom. Fire falls from the sky to destroy the “synagogue of Satan,” as well as any Nazi, Fascist or Communist sympathizers.[13]

Christ returns as king of an Anglo-Saxon empire on earth. This kingdom is explicitly millenarian, again advancing ideas that had mostly been left implicit by earlier British-Israelist authors. When? concludes with the beginning of Christ’s 1,000-year kingdom on earth, after which the Final Judgment would eventually be carried out.[14]

This millenarian utopia is described at some length. Christ racially purifies the United States and Canada by “removing” (through unspecified means) the “seed of the serpent” races. These races are not exterminated, but they lose all of their military and political might. Christ takes up the post of King of Israel and restores “Natural Law,” while reforming man’s banking, currency and tax laws, which are discussed in some detail. Many of these seemingly irrelevant details would become doctrinal tenets in later iterations of Christian Identity.[15]

From start to finish, When? reflects and illustrates the challenges facing contemporary British-Israelism. In addition to his primary focus on rebutting Zionism, the author repeatedly lashes out at the historians and theologians who undermined British-Israel theories, bemoaning the fact that “British-Israel theory is scoffed at by most people.”

When Christ returns and smites the seed of the serpent, he also vengefully strikes down “those who rejoiced the pride of their scholarship and had taught that the Bible was not true.” Among those blamed for leading Israel astray are the Roman Catholic proponents of replacement theology,[16] perhaps the oldest thorn in the side of British-Israelist doctrine.[17] Critically, the author reclassifies many Christian critics from being misguided members of the in-group to vilified members of the out-group – dupes or willing participants in the Protocols conspiracy, spreading the “Zionist scholarship” of the “seed of the serpent.”[18] Those who reject the truth of British-Israelist teaching are repeatedly deemed “apostates.”[19]

While presented as a work of British-Israelism, When? is instead the start of something new—a full-fledged extremist movement, Christian Identity.

[1] Judah, H. Ben. When? A Prophetical Novel of the Very Near Future. British Israel Association of Greater Vancouver. 1944.

[16] Replacement theology holds that the covenants between God and Israel described in the Old Testament were fulfilled by Christ, thus concluding their validity, or that they were replaced by a new covenant established with the coming of Jesus. Vlach, Michael J. "Various forms of Replacement theology." The Master’s Seminary Journal 20.1 (2011): 57-69.