Between the latest Trump drama over the State of the Union, and the similarly stupid drama going on over Brexit, we find ourselves, weirdly, in a situation where British King Charles I is suddenly a trending topic.

You will not find me waxing punditry on the English Civil War, about which I am poorly informed, but suffice to say, some people are seeing similarities between Charles I, who went to war with his own parliament, and certain modern leaders.

My God he really is going to be the king storming parliament https://t.co/CenJLv2kdd
— Pwn All The Things (@pwnallthethings) January 23, 2019

Threatening to storm the legislature at home. Recognizing rival claimants to power in foreign lands. If Trump converts to Catholicism, he just might pull off the Full House of Stuart today.
— Matt Ford (@fordm) January 23, 2019

With all the modern political upheavals this week, we wondered if this might have parallels with the #17thCentury for our #FridayFun this week, and events 370 years ago when the debate was about the trial of #CharlesI - a form of 'Rex-it'...? 😉Have a great weekend... #humour pic.twitter.com/5K9D7u8jOl
— The Cromwell Museum (@MuseumCromwell) January 18, 2019


While I can't say much about whether these comparisons are historically valid, never let it be said that I missed an opportunity to jump on a meme.

Charles I was the villain in the very first example I could identify of a work of dystopian literature situated in the not-too-distant future -- "Aulicus his dream, of the Kings sudden comming to London," a six page pamphlet by Francis Cheynell published in 1644.

A handful of arguably dystopian works preceded or shortly followed "Aulicus his dream," but they fell into two categories:
While these works described dystopian or at least dysfunctional societies, they were not extrapolations of current social trends in real places.

"Aulicus his dream" followed what is now a familiar template, with the narrator falling asleep and predicting the disaster that would follow if Charles I prevailed in his conflict with the parliament. The account is not especially detailed (or clear), but it was enough to qualify the tract as an extremely early example of futuristic fiction, and the very first example I could find of a dystopian tale set in the not-too-distant future. (If you know of an earlier one, drop me a line.) 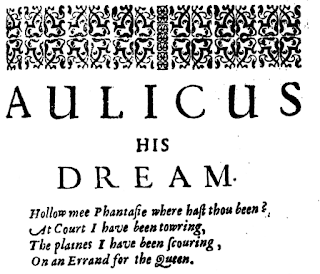 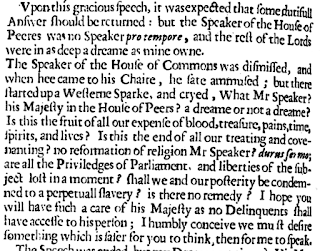 
Supergirl: Man of Steel
Deliver Us From Dystopia
When? A Prophetical Novel of the Very Near Future
The Turner Diaries on PBS American Experience
Logan's Run
Dystopian Robo-Call
The Spook Who Sat by the Door
The Turner Legacy
Racism and Radiophones
The Unparalleled Invasion